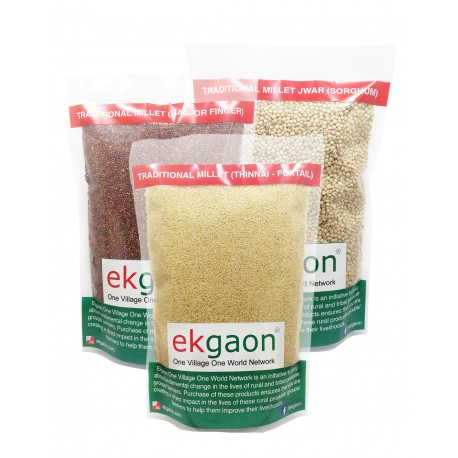 Ragi (Finger Millet) is a widely growing annual plant found most abundantly in. Karnataka is the largest producer of this crop in India with 58% share in the country’s annual production. Benefits of ragi are numerous and it is a highly nutritious cereal loaded with calcium, proteins, iron and other minerals. It is rich in fiber and contains very less unsaturated fat that makes it a perfect food for weight loss.
Ragi’s seed coat is richer in dietary fibre as compared to grains such as barley, rice, maize and wheat. For example, it has 40 times the phenolic content of rice and 5 times that of wheat. Among the millets, it is comparable to foxtail millet, and second only to kodo millet. Excellent grain for reducing cholesterol and helps in weight loss.
It is also rich in antioxidants. Antioxidants prevent excessive oxidation, which could otherwise cause cancer and ageing because of cell damage.

How to Make It:

there are loads of recipes for this millet, where you can use ragi in millet or flour form. Few of them are listed here:

By combining ragi with rice in the right proportions you can make tasty and healthy ragi idli, dosa, upma, etc.

•  Ragi is very popular as an infant and toddler food.To prepare ragi porridge for infants, first soak the required quantity of ragi in water, and grind it. Filter the ragi milk and heat it with a little ghee and salt or milk and sugar till it comes to the required consistency.

•  Roasted ragi, mixed with sugar powder, elaichi and ghee can be used for making Ragi Ladoo.

•  Ground millet can be added to bread and muffin recipes.

•  Ragi halwa is truly a delicacy, while ragi adai is a lip-smacking savoury snack.

Foxmillets (Foxtail) are high in calories, giving strength and energy for farmers to work actively in fields. Foxtail is a vegan food and also gluten free cereal. Foxtail is rich in proteins, and low in fat. It has good amount of fiber content, calcium, iron, potassium, magnesium and carbohydrates. It does not have sugar in any form so foxtail millet is a diabetic food. Unlike rice, foxtail millet releases glucose steadily without affecting the metabolism of the body.

How to Make It:

Soak it in water to 10-15 minutes and wash twice or thrice. Then you may cook it as wheat porridge, upma or just cook as rice!

Sorghum native to Africa with many cultivated forms now, is an important crop worldwide, used for food (as grain and in sorghum syrup or "sorghum molasses"), fodder, the production of alcoholic beverages, and biofuels. sorghum, are predominantly starchy. The protein content is comparable to that of wheat and maize.